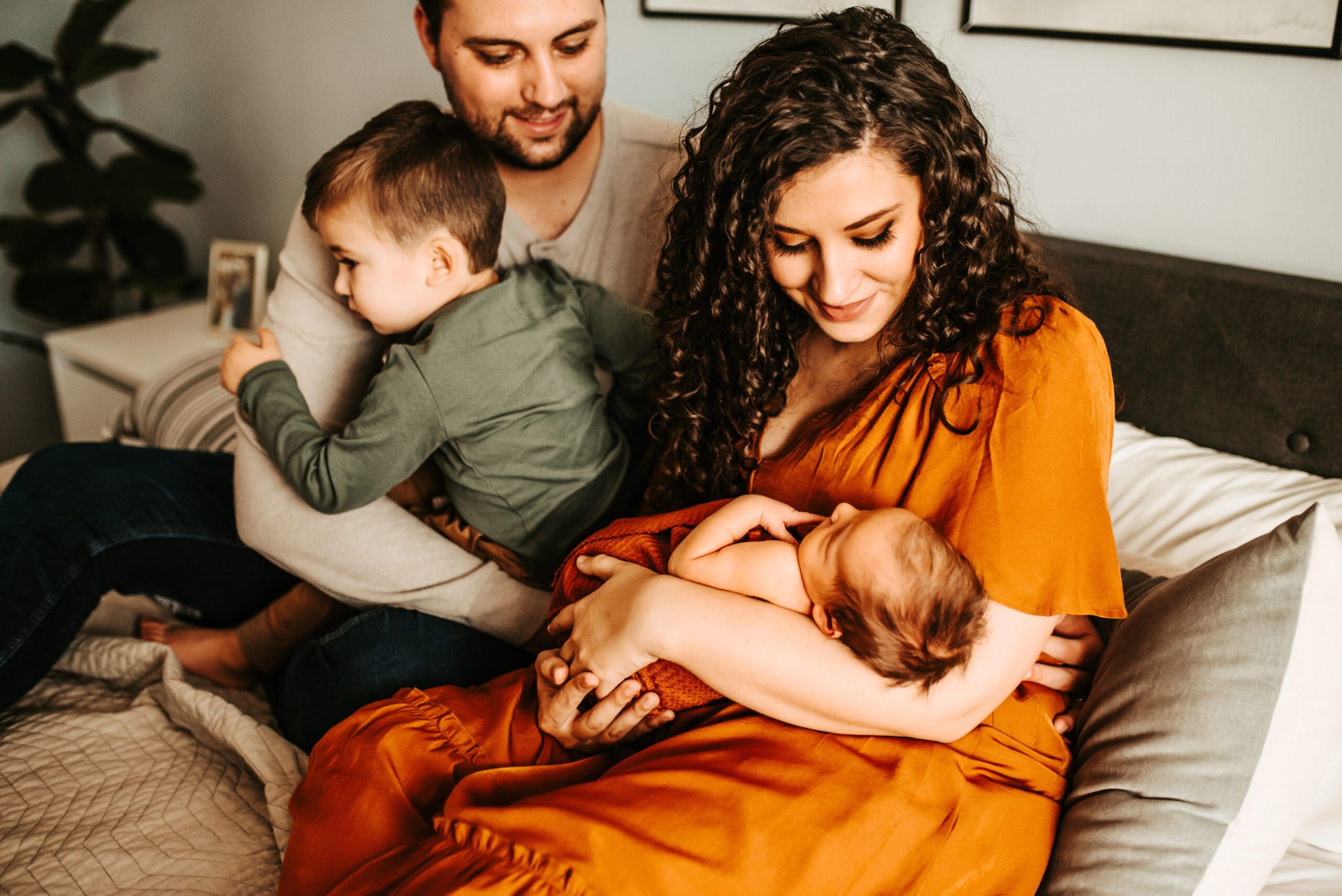 My Mental Health Journey as a Christian

I’ve always been open about my mental health, but I’ve never taken the time to share my journey. My brand manager called me one day with a unique initiative he thought I might relate to and he was right. 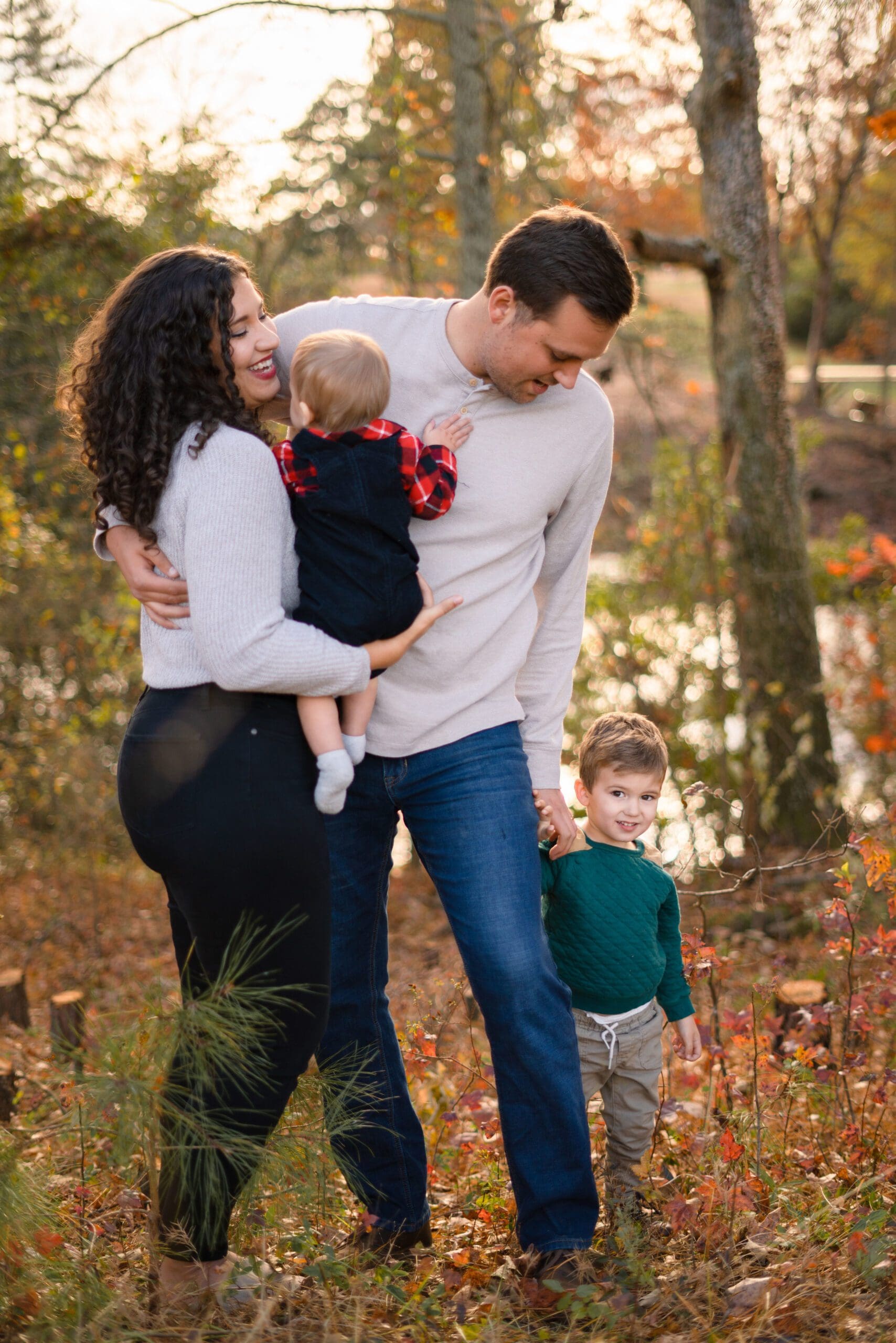 As the play partner of Omega Sports, I participate in their goal for good neighborship in our community. The team at Omega Sports introduced me to Restoration Place Counseling in Greensboro, a Christian-based counseling center which makes mental health accessible and affordable to young girls and women in the community. They seek to raise awareness about mental health–especially in the Christian community where therapy and medication is still not fully embraced by all. Seeking mental health support as a Christian woman is something I can relate to and I knew I had to help in any way that I can, starting with telling my own story.

This is my story.

I’ve had anxiety and a form of OCD for as long as I can remember, though I didn’t always recognize it for what it was. I called those stomach aches I got every day on the way to school my “morning nerves.” I figured the intrusive thoughts that plagued my mind were completely normal. 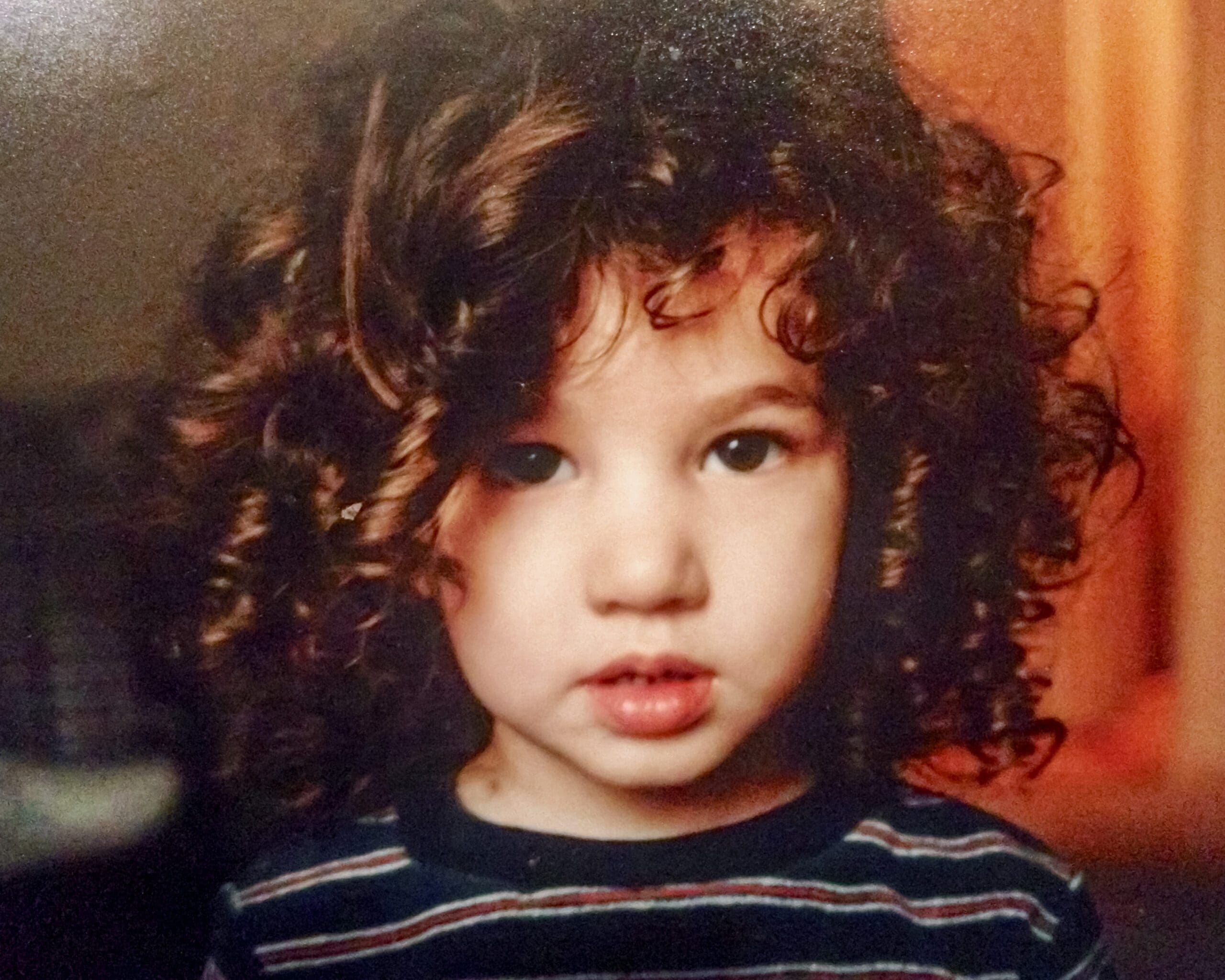 People always joked about the sudden, almost silly, urges they experienced while being able to laugh and shake it off. They didn’t joke about unwelcome images that were so frighteningly vivid and repetitive, it haunted them. But, that must have been normal too, I thought. 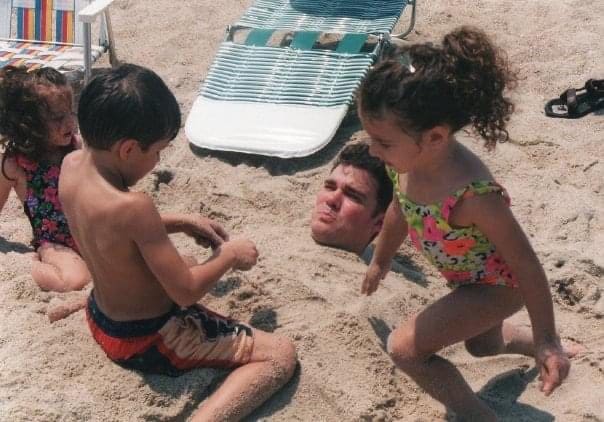 I lived a normal childhood. I had friends, received good grades, had special memories with my family, and attended church regularly. My anxiety and OCD were simply inconveniences—until 9th grade.

My freshman year of high school brought on a complete deconstruction of everything I knew about myself.

I saw doctor after doctor, received countless tests that delivered negative results, and started to lose hope in finding answers to the very tangible physical pain I was in. A doctor finally sat me down and told me he thought I had anxiety and that although it’s a mental illness, it can have very real physical manifestations.

No. No. No. That couldn’t be it. My own mind is attacking itself? Nothing had ever felt so invalidating. It was a hard pill to swallow. 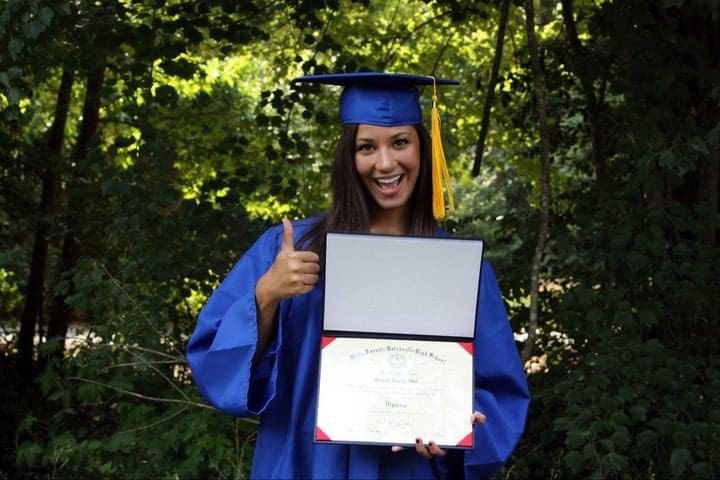 I struggled to make sense of my mental health through a Christian lens.

I dealt with mild anxiety throughout the rest of high school and early adulthood. I now had the understanding that I had anxiety, but I didn’t know what to do about it. It felt like I was constantly underwater, swimming against a never-ending current, and I kind of got used to it.

As a devout Christian, I was under the impression that I just needed to lean more on Christ in order to have peace in my life. As is the case with many Christians, I was often taught at church that happiness is a choice. In both direct and indirect teachings, I was taught that worry comes from Satan and peace comes from Christ. Being a member of a black and white religion can be utterly exhausting when your mind feels very gray. 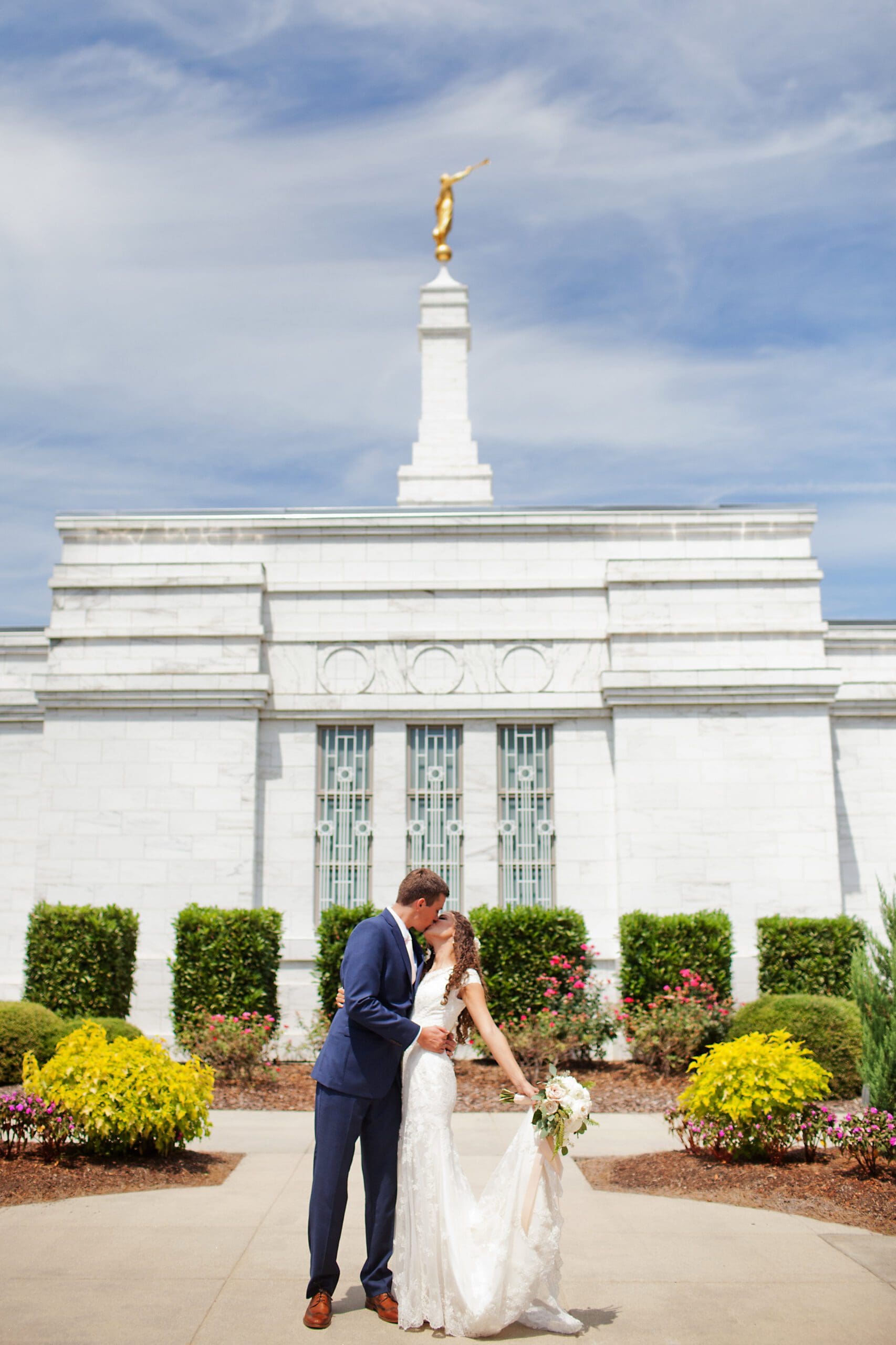 As I matured, I learned more about mental illness and chose to study it further in college where I earned a bachelors degree in marriage and family therapy. I became a big advocate for mental health awareness and believed fully in the benefits of both medicine and therapy. In fact, I worked for a mental health organization after graduating and received multiple trainings on therapy. Despite these milestones, I never looked into therapy or medication for myself.

I was still reconciling my belief in a Savior who knows me perfectly and has the power to heal all, with my confidence in mental health treatments. I’d seek help one day after I’ve tried everything I can to rely on Christ first, I told myself. I’d need to improve my prayers, study the scriptures, exercise more, eat healthier, and a laundry list of other chores that would surely bring peace to my life.

Fast forward to 2018. I was in the hospital after having just given birth to my oldest son, Dean. Bringing a child into the world with my husband by my side was one of the most spiritual experiences of my life. I had never felt closer to God and I felt His love immensely as I held my perfect, innocent baby. 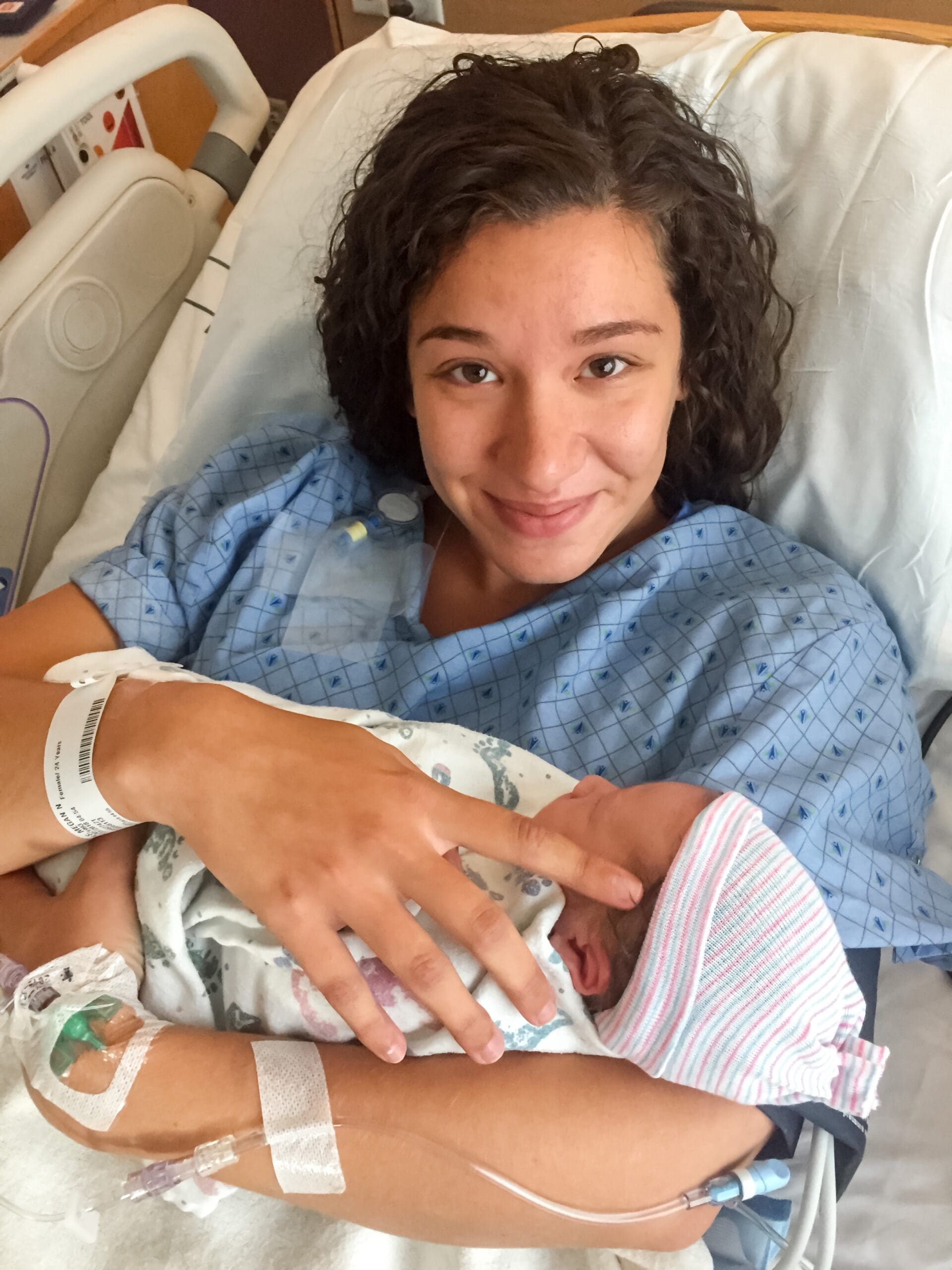 Later, a nurse gently reminded me to not fall asleep holding him because I might drop him and “it has happened here before.” From that moment and all through the night, I had reoccurring, horrific images play on a loop in my mind. I saw my precious, tiny 6 lb baby boy drop to the ground over and over again. I heard the sound of him hitting the floor. The more I tried to make it go away, the more vivid it became. 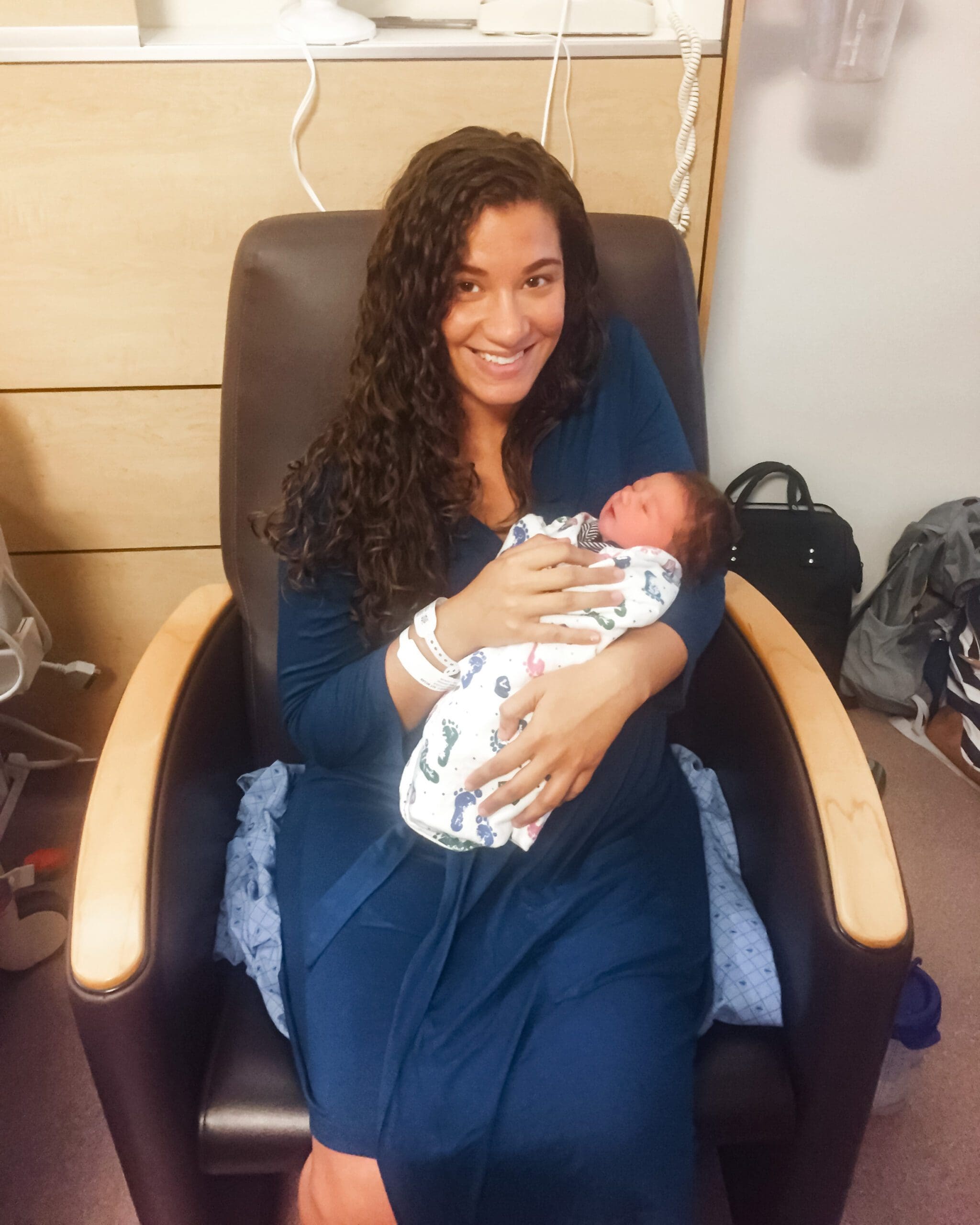 The most empoweringly spiritual 24 hours of my life were also the most terrifying and anxiety-ridden. I somehow felt closer to the Savior than ever before while simultaneously experiencing the most severe intrusive thoughts I’d ever had.

This experience was a direct contradiction to what I had often been taught. Maybe Christ alone isn’t always enough, I thought. While I didn’t feel God remove my anxiety, I felt Him with me, encompassing me in His perfect love. I wish I could say that moment changed me, but still I hesitated to reach out for help.

From that first day and every day of my son’s life moving forward, I suffered with debilitating intrusive thoughts. They were gruesome, frightening, extremely vivid, and always centered around my baby boy. If I boiled water, images of it scalding him played on a loop in my mind. Every time I carried him down the stairs, I saw myself accidentally drop him. Every time I went on a stroller walk, my mind showed me him being devoured by stray dogs. 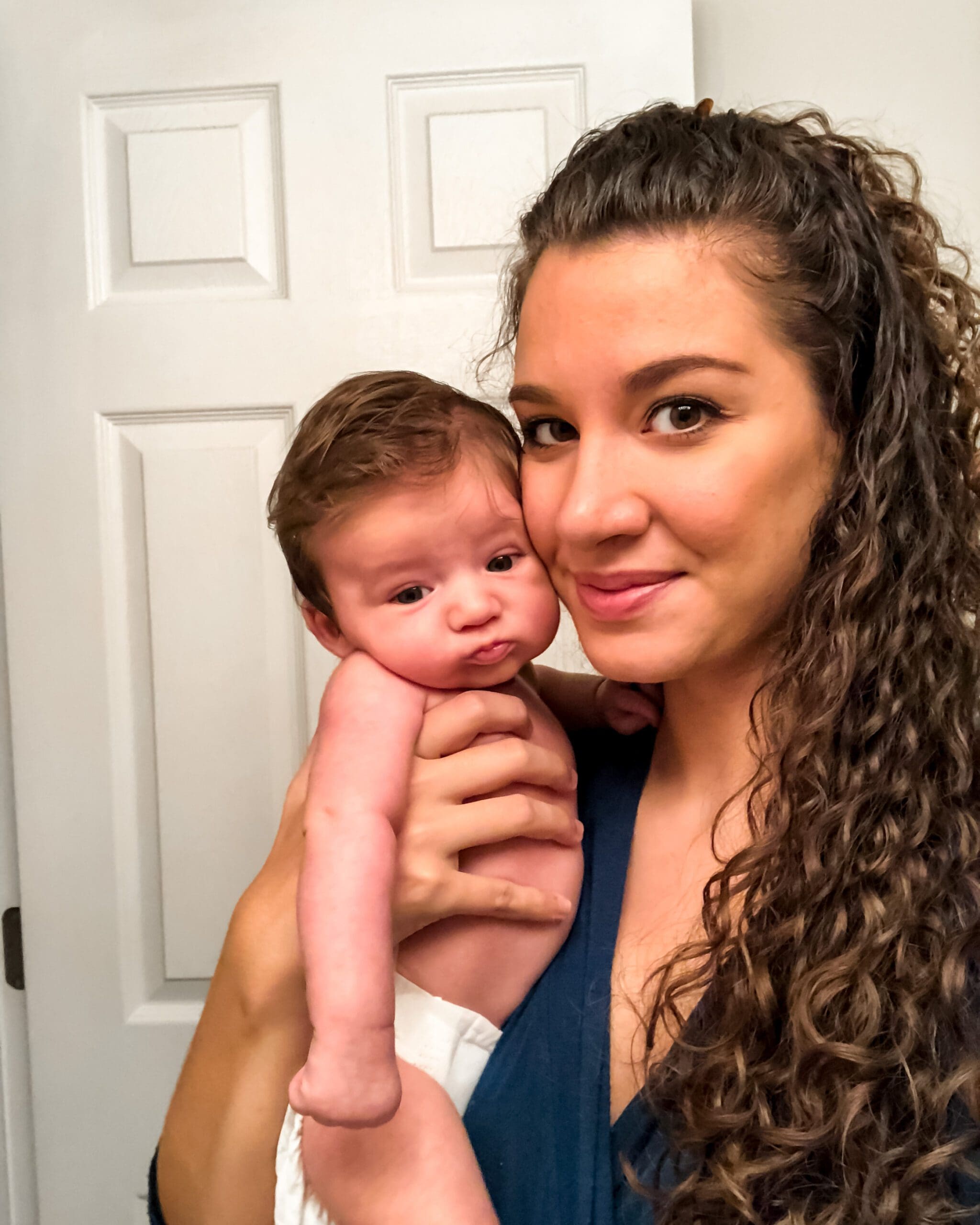 I know this is hard to read, and I appreciate you sticking with me here. It’s hard for me to write, but not nearly as hard as it was to see my baby die in my head multiple times a day, every day, for 10 months. I feel strongly that it’s important to share these tough details without sugarcoating them, because it’s the best way for us to support one another. It took me so long to seek help because I never saw anyone else talk about these symptoms. If even one person reads this and relates to it, that’s important. 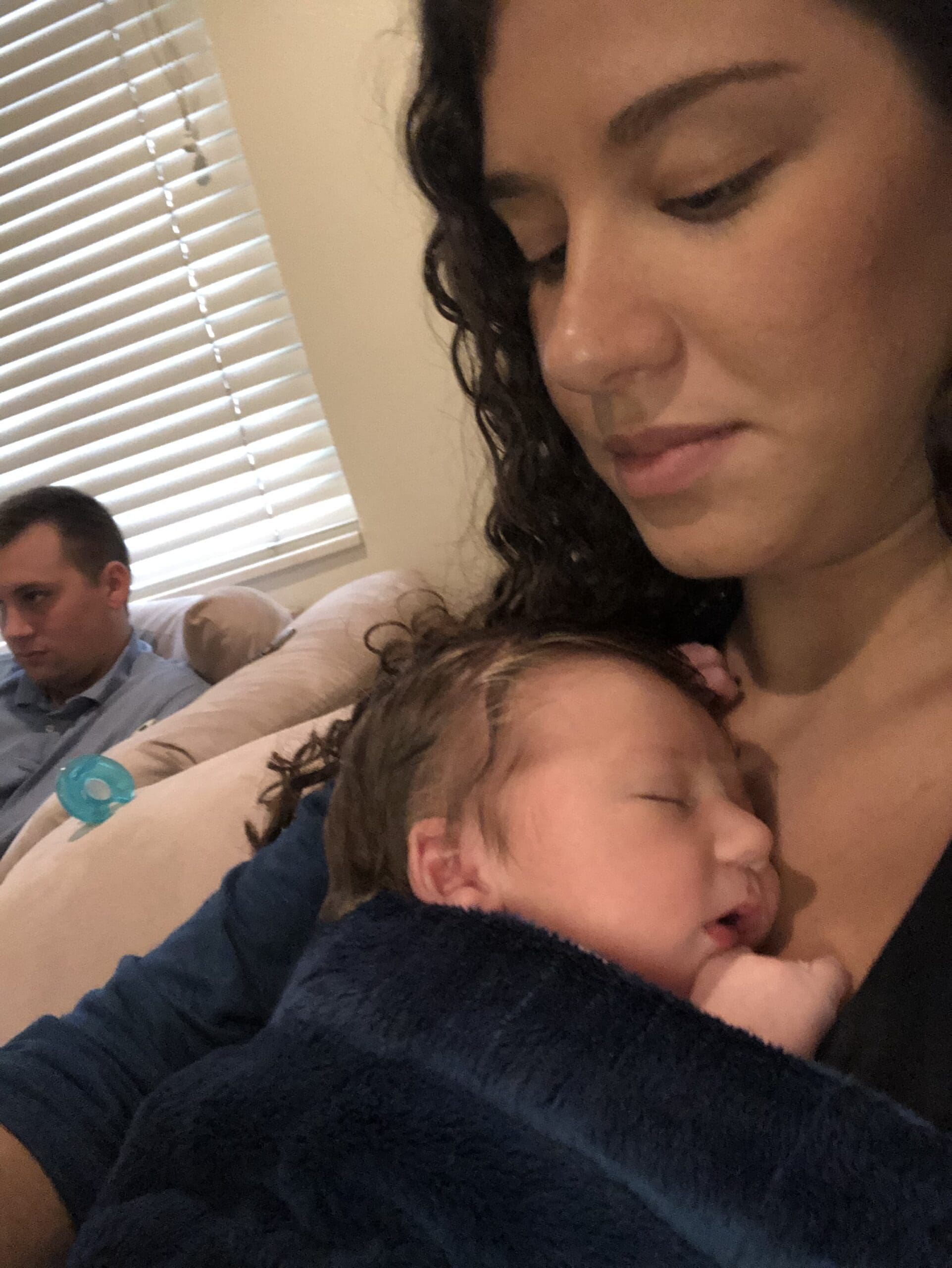 I was used to intrusive thoughts, but not the beast that awakened when my son was born. They made me nervous, uncomfortable, and constantly on edge. My general anxiety morphed into a stronger postpartum anxiety that was fueled by unbalanced hormones and new motherhood.

I became fixated on Dean’s sleeping schedule and spent hours researching sleep every day. Even though I was utterly exhausted and sleep-deprived, I struggled with insomnia as I dreaded when he would wake me up again. 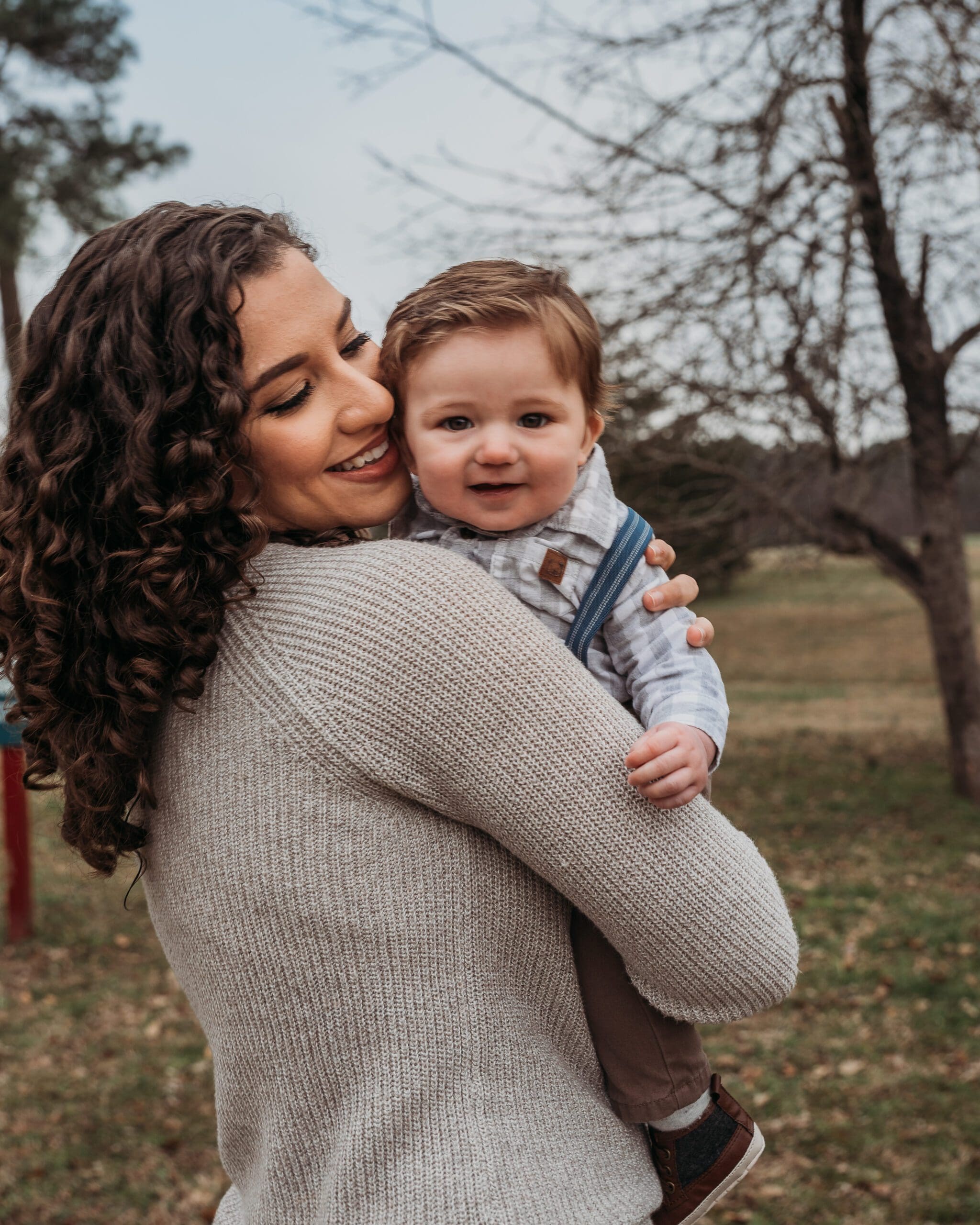 Writing this out makes it seem like I must have been miserable but that’s the thing: I wasn’t. I adored my baby and still felt happy with my life. Postpartum depression seemed to be on the forefront of maternal mental health initiatives and my doctors only ever asked me about that. Do you struggle with feeling connected to your baby? No. Are you unhappy? No.

But…if the answer to all of these questions was no, what was wrong with me? I felt deeply connected to my child and happy with my life. If I didn’t have postpartum depression, these other symptoms must just be what motherhood is. 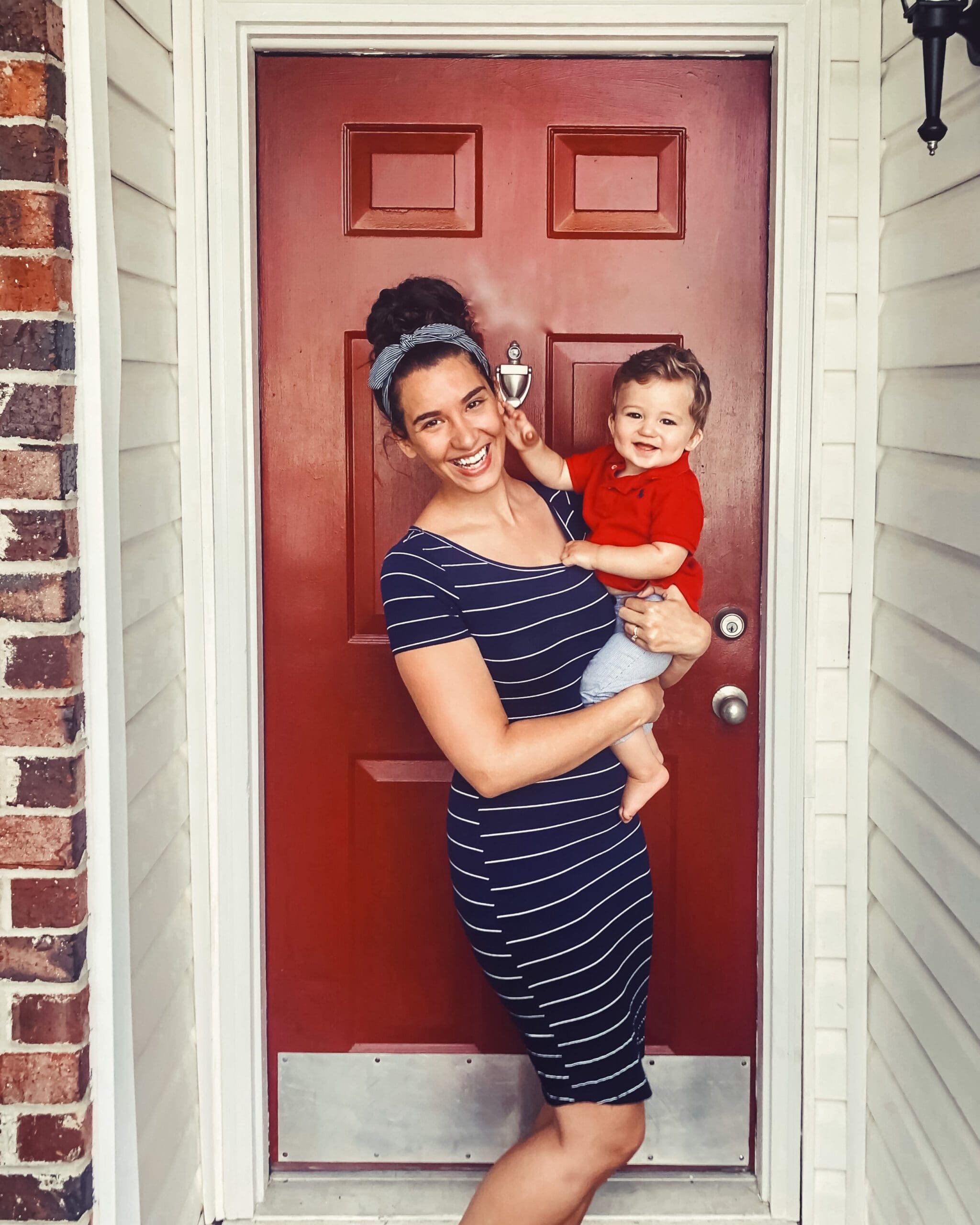 So I lived with it. For ten months, I lived with daily intrusive thoughts and anxiety until I finally sought help. What finally pushed me to reach out? My husband, Harrison He pleaded with me to see a therapist and start medication, just to see if it helped.

That may seem like the obvious solution to someone on the outside looking in but as an anxious person, the thought of getting help seemed scary. I lived with these symptoms for so long, they stopped feeling like symptoms and started to feel like…me. They were who I was as a person. I feared that medication would remove my anxiety, and take me with it too. I feared I would be an empty shell of a person who didn’t worry enough which would then put my baby in danger. In short, I had anxiety about NOT having anxiety. Go figure, right?

During that conversation with Harrison, I felt God’s approval and encouragement. He, too, wanted me to be free of the chains of my mental illness. As I prayed that night, I felt a distinct impression that therapy and medicine are a unique part of God’s plan for many of His children. I finally made an appointment with a local therapist and started medication, both of which have changed my life.

Therapy provided clarity I couldn’t have found on my own.

My therapist diagnosed me with the obvious (anxiety) but surprised me with a diagnosis I had never heard of, but instantly made me feel validated and safe. She told me I was suffering with a form of obsessive compulsive disorder known as “Pure O.”

Pure O is a form of OCD that typically doesn’t include compulsions, but manifests purely as the obsession. The relief I felt in that moment is indescribable. My fixation on the intrusive thoughts was horrible, but without that physical compulsive manifestation, I never knew it was a form of OCD, something that was always portrayed to me as involving aggressive rituals like counting and organizing.

It is not a widely known form of OCD, something that I’ve been on a personal mission to change with my openness about it. I would have never come to that conclusion on my own. I needed my therapist’s knowledge and expertise to find my answers. Once again, I felt Christ with me in that moment.

At the same time I started seeing my therapist, I began taking Sertraline (Zoloft). Almost immediately, I received the most relief I had felt in years from my intrusive thoughts. I would walk down the stairs and realize at the bottom that I didn’t see Dean fall this time. I’ve been on it ever since, with zero shame. 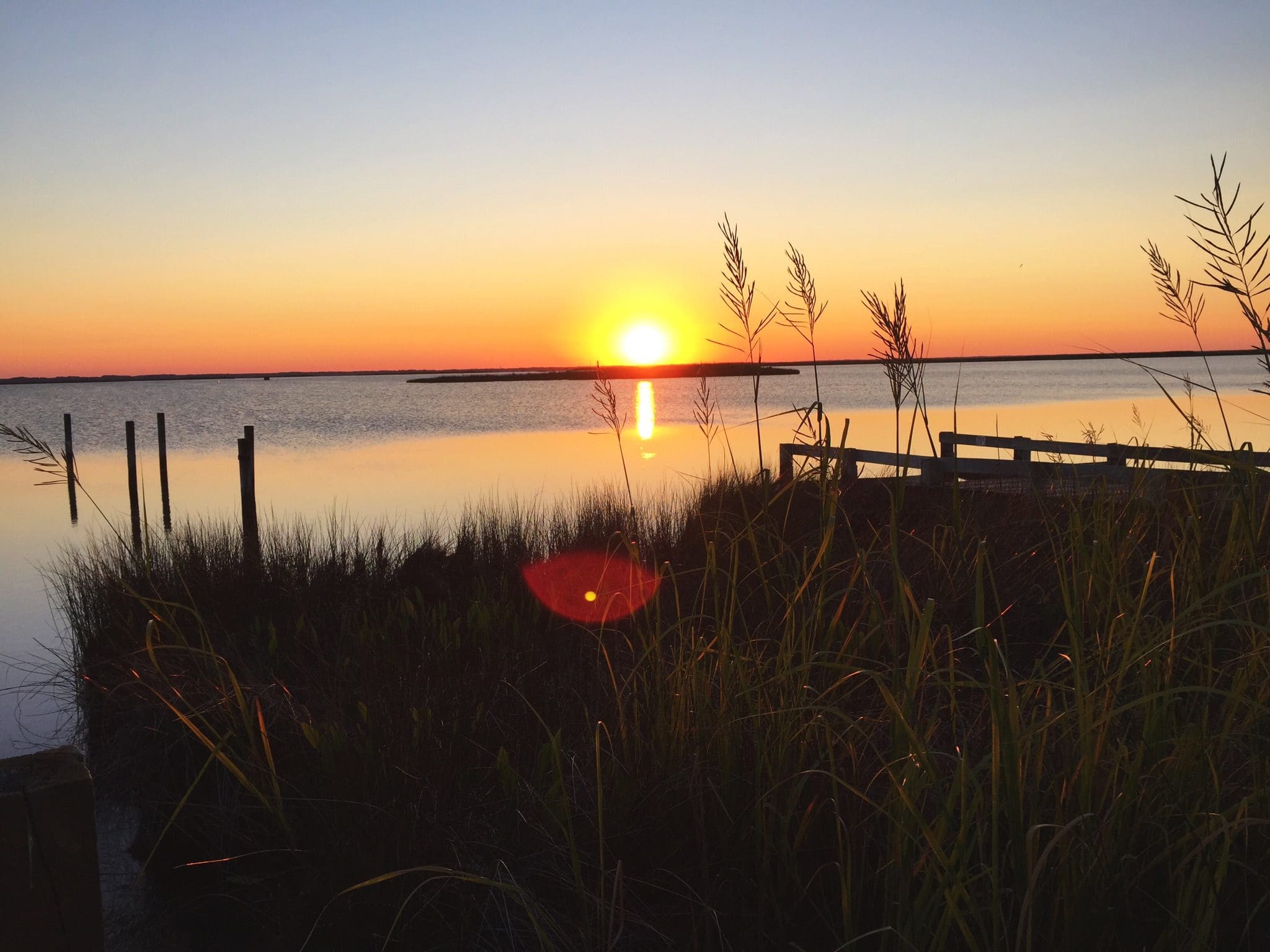 Therapy coupled with medication has made life easier to live and enjoy. It has made me a better mother, wife, friend, and disciple of Christ.

Did it drown the real me like I feared it would? Far from it. Instead, it gave me the tools I needed to escape the devastating current which dragged me farther and farther from the light. I was finally able to swim to the surface and feel the sun on my face once again.

I waited years for Christ to pull me out of the rushing water. I swam with all my might against the current and got nowhere. I pictured Him above the surface, with his arm outstretched to pull me to safety. I think that’s how it goes for some people. But that wasn’t my story.

Christ wasn’t waiting at the top for me–He was with me in the dark, churning water the entire time. He handed me the life preserver that was therapy and medication and together, we swam to the surface.